The Psyched Index published in The 2017 Shipping Forecast

Psyched’s sister business, The Lighthouse Company, recently published their annual Shipping Forecast with results from the 2017 New World Talent Survey. Detailed below is a section entitled ‘The Psyched Index’ – designed to shed light on mental wellbeing and performance in the advertising, media, marketing and technology sector.

The 2016 Mental Health at Work Report highlighted the concerning fact that 77% of employees have been affected by symptoms of poor mental health in the last year, with 62% of employees attributing their symptoms directly to work or feeling work was a contributing factor.

UK Prime Minster Theresa May acknowledged in January 2017 that for too long “mental health has been shrouded in a completely unacceptable stigma and dangerously disregarded as a secondary issue to physical health”.

In response to this developing dialogue, the Lighthouse last year launched Psyched, a transformational development business. Psyched was specifically designed to take better care of our modern-day leaders’ ‘whole self’ and guide them in supporting the people they lead. As we look to the results of our Psyched Index in this survey it seems our timing was critical.

The evidence for tackling the negative effects of poor mental health has never been clearer, both at a macro-population level and more specifically within our workplaces. A 2015 study by Harvard Business School and Stanford University concluded that workplace stress is as bad for us as second-hand smoke.

Perhaps you won’t be surprised the World Health Organization now cites stress as the 21st Century’s biggest health epidemic, costing the UK economy alone £57 billion a year in lost productivity, while closer to home The Drum’s 2016 Diversity Census indicates that 27% of those in our immediate industry described themselves as ‘stressed most of the time’.

2017 brings a first to our New World Talent Survey, as we made a conscious decision to mirror a number of questions asked in the National Employee Mental Wellbeing Survey 2016, reflecting the voices of nearly 20,000 individuals*.  Branded ‘The Psyched Index’ we now have the ability to benchmark the views of our industry’s leaders versus the population at large providing huge insight into the overall wellbeing of our industry’s biggest asset – its people.

WE (STILL) NEED TO TALK

When looking at which topics our industry’s leaders are comfortable talking about in the workplace, there are clear signs of great progress in some areas. There is no doubt that the sterling work of organisations such as WACL combined with the growing public reprimand of misogynistic behaviour has helped 77% of our leaders be more open to talking about gender at work; 38% higher than the working population as a whole, and 13% greater than managers across all industries.

Similarly relationships with others (77%), sexual orientation (65%), physical health conditions (65%) and race (62%) are conversation topics that the majority of our industry leaders are happy to have.

However, at the opposite end of the spectrum, there are clearly three topics that still appear taboo – mental health, disability and religion. Perhaps driven by the discomfort and fear of potentially saying the wrong thing, or remaining tentative in approach, it is clear we still have work to do in moving to a place where we are comfortable to engage and connect no matter the subject. 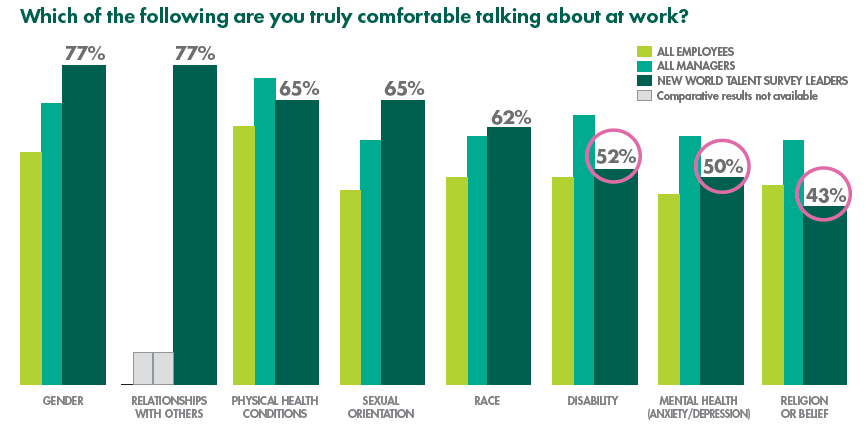 Only 52% of our leaders feel comfortable talking about disability; this is despite continued mainstream exposure of the topic through the likes of AMV BBDO’s powerful work for Maltesers featuring four disabled actors and the amazing success of Channel 4’s The Last Leg and their ‘We’re the Superhumans’ Paralympic campaign. This score is a clear 20% lower than that for all managers across all industries.

With religion and belief being very personal to the individual, the fact only 43% of our respondents feel comfortable talking about it at work may be to some degree understandable, yet this score remains 27% lower than that expressed by all people managers nationally.

However, as leaders we do have a clear duty of care for the mental health and performance of our employees – yet half of us still feel uncomfortable talking about this at work. We owe it to both ourselves and those we lead to try to crack this pervasive culture of silence around the topics of anxiety and depression to truly become a sector who utilise the growing understanding of the human mind to unlock the potential for future growth and success.

From the thousands of conversations the Lighthouse conducts with leadership talent every year, we fully understand the importance of sometimes being able to mask emotions and how one is really feeling in order to lead from the front. The ability to hide signs of things being amiss can be driven by the very same traits that keep senior executives at the top of their game, such as super-human stamina and resilience.

But just how much of this masking is deliberate and how much is unconscious? In The Psyched Index we asked our respondents to rate their own personal wellbeing alongside that of their leadership team and their wider organisation. The results were rather illuminating.

On average, 61% of leaders rated their overall wellbeing positively, with 43% rating their leadership teams the same way and 38% scoring their wider organisation positively.  Overall, our leaders were 50% more likely to score their own personal wellbeing as excellent or good versus anyone else in the organisation.

This also played out across every individual element of the ‘whole self’. Whether relating to physical, mental, spiritual or emotional wellbeing, our respondents were more likely to score those furthest away from themselves in the organisation as being more challenged. It’s curious how leaders were able to identify emotional challenges in others, but not in themselves. We wonder if this ‘it’s you, not me’ stance reinforces the stigma for others and equally denies leaders the critical support they themselves may privately seek.

Across the years organisations have excelled in helping employees address their physical wellbeing through health checks, gym subsidies and the like, so perhaps it should come as no surprise that overall our leaders believe that there is the smallest gap between their own positive physicality and that of those in their workplace (a 19% difference between the leaders and their employees). Contrast this with the biggest perceived gap – mental health. 70% of leaders rated their own mental wellbeing as excellent/good, 52% ranked their leadership team this way while only 42% ranked their employees positively (a 60% difference between leaders and employees).

We feel there is a degree of masking evident in these results. As passionate advocates of positive wellbeing in every sense, we truly encourage you to stay open to the belief that in accepting and showing vulnerability yourself you allow others to open and explore in return.

A DUTY OF CARE

There is no mistaking that mental health in the workplace can be a challenging topic that has to be handled incredibly well – there isn’t really an option for a halfway house. Knowing the processes your organisation has for supporting those who seek to improve their mental performance is arguably more important than knowing what to do yourself. The good news is 95% of our leaders felt some level of responsibility towards the wellbeing of their teams. In reality The Psyched Index highlights an equal number of industry leaders (18%) don’t know how well their organisation supports employees with mental health problems, versus those who believe their organisation supports them very well (17%).

Despite 63% of our industry leaders believing that their organisations somewhat support those experiencing mental health issues, The Mental Health at Work Report counters that only 45% of people managers across all industries – those who are arguably closer to a broader range of employees – agree there is good support in place. Perception versus quantified reality highlights further disparity between intention and delivery.

THE TIME IS NOW

Last year’s New World Talent Survey concluded that leaders in the advertising, media and technology sector were ready to redress the balance of their cognitive and emotional selves. 80% of those that we surveyed were open to the idea of psychoeducation and therapeutic programmes to aid professional development – of these 25% had already had some form of therapy to develop themselves while another quarter were actively considering it.

This year The Psyched Index asked our leaders directly which area of personal wellbeing their organisations could provide them with support in. Almost 8 out of 10 of our respondents proactively chose support for the non-physical, with 61% of these opting specifically for help with their mental wellbeing.

Peak performance begins and ends with all parts of our being working to their full potential. While we still encounter workplace reticence when talking about mental wellbeing, there is no denying the conversation is getting louder, with ears more willing to listen and a clear desire for organisational support within our industry. The time is certainly now.